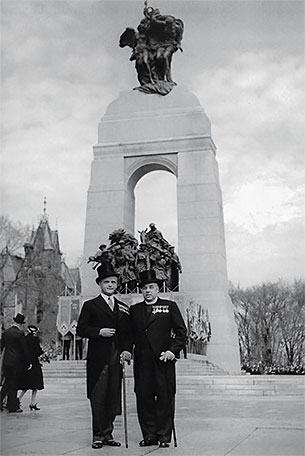 Edwin Baker, Vice-President of SAPA, and Padre Sidney Lambert, first President of The War Amps, at the unveiling of the National War Memorial in Ottawa, May 21, 1939.

In the late 1920's, the federally-chartered Veteran Associations in Canada began to appear before Parliamentary Committees to present the concerns of Canadian veterans following World War I.

This informal group continued to meet in Ottawa in the early 1930's and in January 1932, the group made a joint presentation to the Government of Canada. The signatories to that presentation were:

On August 4, 1932, by Order-in-Council, a Committee was established to investigate the administration of the Pension Act. The five federally-chartered veteran organizations mentioned above were represented on this Committee.

In the late 1930's, it became the practice for the Legion and the Army and Navy to make separate submissions, with the War Pensioners, the Sir Arthur Pearson Association and The War Amputations joining together in its representations to the Government with particular focus on the position of Seriously Disabled Veterans. The Canadian Corps Association was formed about this time, adding another strong voice in the veterans' field.

Following the commencement of the Second World War, Col. Edwin Baker of the War Blinded, who was also a member of the Dominion Council of The War Amps, considered, in the interest of the veterans, that something should be done to bring together the disabled veteran organizations. In this way, presentations to the Government would be considerably enhanced.

Arising out of this, The National Council of Veteran Associations in Canada (NCVA) was formed. This consisted of The Amputations Association (later known as The War Amputations of Canada), The Canadian Corps Association, The Sir Arthur Pearson Association of War Blinded, The Army Navy and Air Force Veterans and The War Pensioners of Canada.

The Hong Kong Veterans formed themselves into an Association after the Second World War and were invited to join NCVA, along with The Canadian Paraplegic Association. In order to widen its scope of influence, NCVA continued through the years to accept a number of other veterans' organizations into membership.

The many advantages of joint action were never more clearly demonstrated than during the investigation of War Disability Pensions by the Committee to Survey the Organization and Work of the Canadian Pension Commission (The Woods Committee).

When the terms of reference of the Woods Committee were announced, NCVA held a meeting in Toronto to plot a strategy. It was agreed that NCVA would submit two briefs, one of a general nature and a second dealing with the need for some type of "super pension" to compensate multiple disability cases. In addition, it was agreed that each individual organization would submit a separate brief, concentrating on one or two specific points of interest to that particular organization. The result was that The Woods Committee received a large number of briefs covering the full spectrum of the Pension Act through the member-associations of NCVA. The coordinated effort, which brought about this result, paid handsome dividends.

There seems little doubt that this further unified action had beneficial results. When the Government White Paper was released in September 1969, it became evident that the Government was not prepared to implement all of the recommendations of The Woods Committee. As a result, NCVA held a meeting jointly with senior officials of The Royal Canadian Legion. The consequence was that two general briefs were submitted to the Standing Committee on Veterans Affairs. Then, on an individual basis, each member organization of NCVA submitted a separate brief, providing the Standing Committee with the full views of the membership on specific points of special interest to the various organizations. 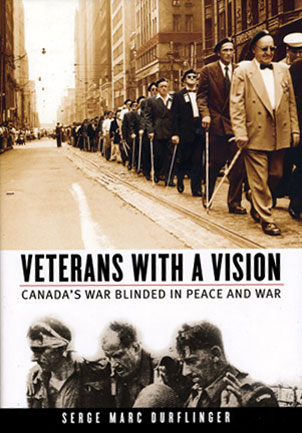 In the book Veterans With a Vision: Canada's War Blinded in Peace and War, author Serge Marc Durflinger expands on NCVA's history, excerpted in part as follows:

Over the last half of the 20th century, NCVA was frequently successful in pressing veterans' claims in briefs before parliamentary committees, royal commissions, the Canadian Pension Commission, the Department of Veterans Affairs and other government agencies.

In general, NCVA has been successful because of the joint petitions, mutually supportive goals and close, fraternal cooperation of its members.

In response to a 1952 public inquiry, Edwin Baker recalled that NCVA was formed "to promote understanding, cooperation and if possible uniformity in recommendations, proposals, and active efforts for the welfare of ex-servicemen, disabled and otherwise, in Canada."